It looks like you have an ad blocker. You can therefore not choose which cookies we place. That is why we only place the functional cookies.

Biodiversity is an important issue for Dutch companies, according to an annual survey on various sustainability topics by the Dutch Association of Investors for Sustainable Development (VBDO). Thirty-eight Dutch listed companies were surveyed, and seven of those were found ‘leading’ on biodiversity. a.s.r. is one of those companies and the only insurance company on the list.

Biodiversity finally on the agenda
After companies ignored biodiversity for years, it is now seen by the vast majority as a material theme. This is the conclusion of research done by VBDO. Many organisations depend on biodiversity for their activities and, for their part, have an impact on it as well. For example, worldwide bee mortality is associated with the overuse of pesticides by the agricultural sector. This mortality has consequences for that very same sector, because bees are needed for pollination of most vegetable crops and fruit trees.

Biodiversity strategy
While many companies recognise the importance of biodiversity for their own activities, the VBDO report finds that they often lack sound strategy. Only one in four companies currently sets comprehensive, specific goals. The financial sector in particular has been paying more regard to biodiversity, whereas the technology sector is still lagging behind.

a.s.r. has a comprehensive biodiversity strategy. Jos Baeten, CEO of a.s.r.: ‘Besides climate change, the loss of biodiversity is one of the most significant challenges we are currently facing. At the same time, companies in which we invest have either a positive or a negative impact on biodiversity. We recognise, therefore, that the financial sector is crucial in its protection and restoration.’

Recognition for our efforts
Jack Julicher, CEO of a.s.r. vermogensbeheer: ‘As a.s.r. we are pleased with the recognition we are receiving for our commitment to biodiversity. The qualification ‘leading’ is a confirmation that we are on the right track with our current efforts and strategy. In addition to climate change, we see the conservation and restoration of biodiversity as an important challenge and we recognise that the financial sector plays a crucial role in bringing about change. It starts with ‘doing’. In 2020, we became a committed partner to the Finance for Biodiversity Pledge, the biodiversity pledge that puts the rapid decline of biodiversity on the agenda of financial institutions. And this kind of research contributes to keeping it on the agenda and creating awareness.’ 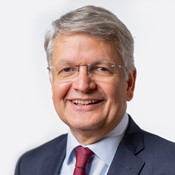 Jack has been the chief investment officer and chairman of the management team of a.s.r. asset management since 2003.